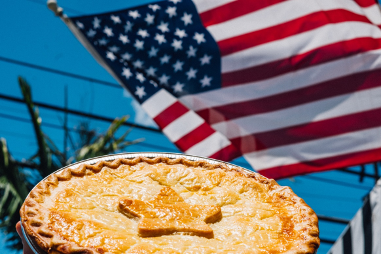 POLLY’S PIES IS HOSTING DONATION-DRIVEN PIE DRIVE THROUGH JULY 4TH WITH PLANS TO DELIVER 1,000 PIES TO THOSE STATIONED AT CAMP PENDLETON

High-Pie Our Active Military this Independence Day by Purchasing a “Pie for the People,” Polly’s Pies non-profit Initiative

Placentia, Calif.—June 21, 2022— This July 4th it’s crust or bust at Polly’s Pies as the family-owned restaurant group salutes our active military stationed at Camp Pendleton. Polly’s goal is to sell 1000 “Pies for the People,” a $16.49 pie donation, from now through July 4. For every Pie for the People donation, Polly’s will donate a real pie and coordinate with Team Darkhorse, the nickname given to the 3rd Battalion, 5th Marine Regiment, 1st Marine Division based at Camp Pendleton, to donate and deliver the baked goods later this summer.

“One of our pillars at Polly’s is to honor the men and women who serve our country,” said Jacklyn Mitosinka, director of brand for the popular restaurant. “Independence Day is about more than just barbecues and fireworks – it’s about freedom and those who have sacrificed for the greater good. We have had a wonderful relationship with Dark Horse, and our team is looking forward to personally delivering these pies to Camp Pendleton in mid-July.”

While making a military donation, guests can also pick up a pie for themselves, including the limited-time only Key Lime Pie. Apple pies will be adorned with pie-crust baked stars as a nod to Independence Day during July 4th weekend only.

To purchase a Pie for the People for military stationed at Camp Pendleton, visit pollyspies.com or stop by any of Polly’s Pies 13 locations throughout LA, Orange and Riverside Counties.

Founded in 1968 by brothers Eddie & Donald Sheldrake, Polly’s Pies has been family-owned and operated for more than 50 years. The restaurant offers breakfast, lunch and dinner as well as Polly’s signature pies and an assortment of fresh bakery items throughout Orange, Riverside, and LA Counties.